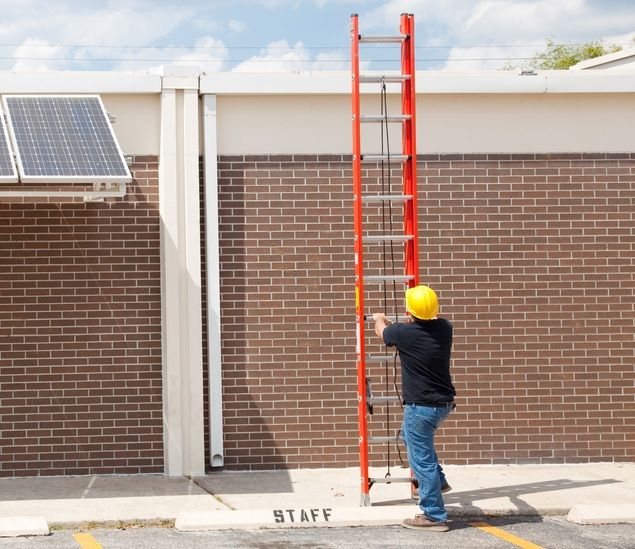 You know the use of a ladder is not too tough to operate. But some particular ladder, such as the extension ladder, requires technique to use it properly.

With that said, the question of “how to use an extension ladder” or the safe use of extension ladders got universal attention. Although, it is not so challenging to operate correctly. But of course, it needs attention and proper guidance.

Let’s get started with the definition.

What is an extension ladder?

Consequently, we have briefly described the definition of an extension ladder. Then go for other segments step by step.

However, an extension ladder is a sort of ladder that is not self-support like a step ladder. It requires stable architecture to stand at its feet. Clearing speaking, it is not a self-supported ladder. Generally, it is a straight ladder that bears two parts. Whereas one is fixed and another part is adjustable or customizable.

The adjustable parts of a ladder, allow user to extend the overall height up and down as per need. Besides, make it easy for the user to fold it and store it in a small space.

See the extension ladder parts details with a picture diagram for a clearer view.

How many parts an extension ladder has?

The vital part of any ladder is its feet. In the case of an extension ladder, it is also applicable but with only one variation. Yes, many extension ladder pack with safety shoes or foot that form with pads. These pads are meant to touch the ground at the time of use.

Generally, it will be rotated or swiveled for getting proper contact with the ground or surface where the ladder stands.

The most unique section of this ladder is its flying part, for which it mainly got the name of an extension ladder. Eventually, this part is used to maximize the ladder length to reach the highest place.

Like any typical ladder, the base is the piece of an extension ladder that stands on the place. At the time of your climb, you have to place your first feet on the rung of this fixed part. It is known as the base section.

An extension ladder’s integral and safety unit is rung lock. When you maximum the height, it is a part that locks the flying section and helps keep it in an exact place. Literally, it works like a bracket for which the flying part can’t slide down or up until you release the lock.

Not all extension ladder comes with the 5th number part, namely rope or pulley system. The ladder is extra-large in size, having this little part.

The part that joins rung, steps, and braces of each side of the ladder is called the side rail. See the picture point if you are not getting our single.

How to use an extension ladder (Included Extent Process)

In the very first step, you need to shift the ladder to the area or venues where you want to use it for your work. Make sure your ladder remains lock, unfolded, and straight when shifting.

Now moving to the next step, let’s see how to extend an extension ladder. We have shown you the actual process. Well, to raise or extend the ladder you have to lay down the body of the ladder on the ground. And beware its feet are proximate to the wall from where it takes the support to stand on its feet.

As we already mention the extension ladder is not a self-supported device.

Forward to the next step, it’s time to lift the ladder carefully. You have to raise the end part of the ladder until it’s got a vertical position.

At this point, stand in way; you are between the ladder and the wall and facing the ladder.

However, after making it in a vertical position now, it’s time to raise the top part of the ladder. For doing so, different extension ladder has different technology. For example, if you own small or stander size. Then you have to push up the flying part manually to extend it.

But if you have the larger one, there must be a rope feature to its extent. Meantime you need to pull the rope, and your ladder will be raised automatically.

Continue this process until you reach your desired height. Ensure the flying part is in the top section and the base is on the ground.

When you have done with the pull-up session, you need to lock the flying part with the rung lock feature.

Before climbing, make sure both flying and base parts of the ladder are totally in touch with the ground and wall. Not climbing on it if you find it is not touching the wall or floor properly.

Your setup is completed, and you can now climb the ladder. Keep in mind; you must climb one rung of the ladder at a time. And you have to use both hands for holding the upper rung or side rail according to your comfort.

See the video if your are still confused about extension ladder placing.

If you follow a few safety rules, an accident’s chance will diminish fruitfully. Below we have written down the most significant point.

Answer: Firstly, place your ladder on the ground by following the angle rule. Secondly, ensure your ladder is placed at least 3 feet above from roof edge.

Lastly, tie off your ladder bottom and the top part with solid construction.

Now your extension ladder is ready to get on a roof.

Answer: Generally, there are five basic rules of extension ladders.

Answer: The three most common dangers associated with extension ladders are:

This website is owned and operated by William Richardson. William is a participant in the Amazon Services LLC Associates Program, ClickBank, and a few other sites. These affiliate advertising programs are designed to provide a means for sites to earn advertising fees by advertising and linking to specific sites.