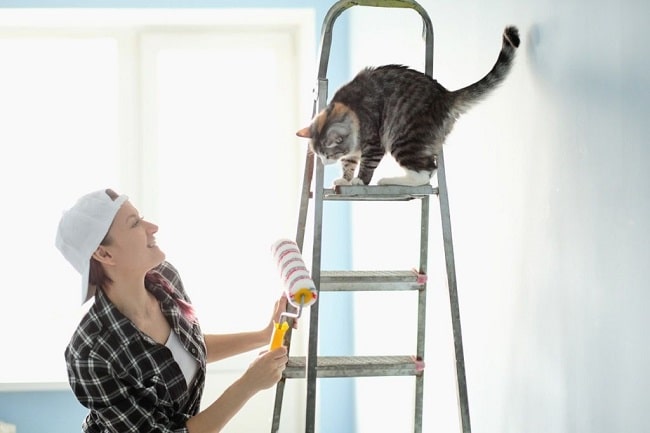 Literally, a step ladder is the ultimate accepted and maximum usage ladder whether for an indoor or outdoor place. Consequently, the knowledge that how to the safe use of step ladders is a very curial matter which every ladder holder should know.

Although few people find it a light lesson in reality the step ladder safety acknowledgment is essential for saving you from an undesirable situation. However, along with safety tips and user guidance, we have included the actual definition and ladder entire parts with a picture graph.

Now scroll down to get the complete details.

In the case of the definition of a step ladder the first thing that comes to mind, it’s a self-supported portable ladder. Generally, it bears two parts among which the front part having flat steps and used for climbing up and down.

Both parts are combining together with the help of spreader bars that feature hinges. Mainly it is a part that capable step ladder to stand on its feet. It does not allow adjusting the length like an extension ladder. But offer a variety of size option that starts from 4ft and ends at 20ft or more depending on brands and price.

This is a ladder used for whether changing bulb or certain, painting wall, cleaning gutter or windows means small sort of project. Basically, design to mean for only one person climbing.

You will get a more clear view from the picture graph, see below. 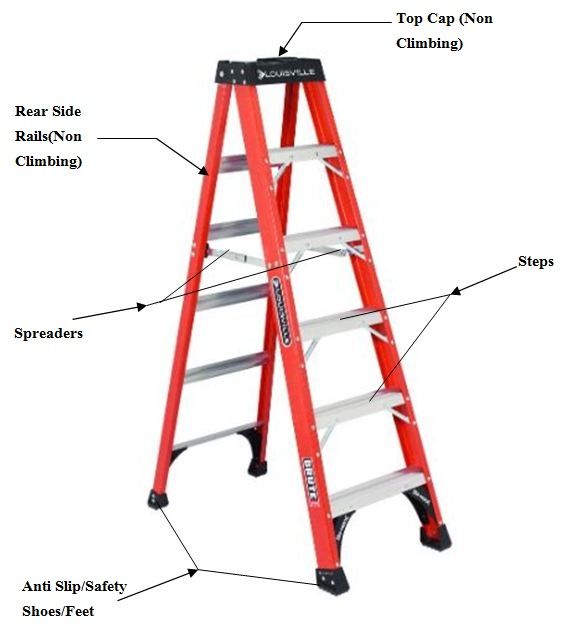 Entire parts of a step ladder

Forwarding to the part details we have included both picture and word specifics in order to give you a clear idea. Before using this ladder a user must have to know the diverse parts of the ladder.

1. Top cap or cap – We begin to elaborate the ladders parts from its upper section. Meantime the top cap or cap becomes first discernible. Well, it is mainly the joining part of a step ladder that used to secure the central section of the ladder.

Since it comes in a structure of a tray and users often used the piece for putting their needed tools.

While it looks like the climbing part but beware you should not stand or climb on the portion.

2. Head step- Next section is the head or top step that is another part that is also not primarily used to climb on.  Although some brands may allow it for use as a step it is not safe to use so better avoid it.

3.  Steps- The precious and main part of any ladder is its step which all of us familiar with. The exception lies that few may offer slip resistance hi-tech. However, the step ladder chiefly comes with at least 5 steps which may vary from one to another depending on brands, price or size.

4. Spreaders- A spreader is typically a metal bar used to joint the front rails and side or rear rails together. It also has hinges in the middle portion of the spreaders which work for smooth open and close of the ladder

The hinge has a lockable system and works for ladder stability and security.

5. Rails- The part in which the all step of the ladders is attached is called rails. It is vertical in shape and varied in size from one ladder to another depending on the ladder’s actual size.

6. Feet or Shoes- The last number part or piece of step ladder is feet or shoes. It can be a feature with anti-slip technology or can be not. But it really necessary that at the time of your shopping you need to notice the shoes are offer anti-slip quality.

How to use a step ladder safely

In order to use a step ladder safely, you need to follow some basic methods. Meantime we have included those methods very clearly. Let’s have a look.

1st Point- Very first chooses a clean, flat and anti-slip surface for placing your ladder. Then carefully open the step ladder and make sure both sides spreader and hinged are lockdown and remain straight. It is needed that the ladders each foot (4foot) are firmly making contact with the surface or ground.

Never used a step ladder if you found the spreader lock is damaged or broken.

​​2nd Point- After fully open the ladder the next move is climbing up for finishing your job right? In case you must be remembered a user always has to use only the front part of the ladder. Likewise, as we have said before as you have to ignore the top step which narrows in shape.

Make sure the shoes of the ladder are perfectly set on the floor.

3rd Point- The third number point is very common which might be known by all people. However, only one person can climb the ladder at one time which you should be careful about. Besides at the time of climbing up and down a user must have to use both of the hand for holding the upper step or side rails.

You must be always climbed one step at a time, which means you need to move one hand and one foot at a time.

​4th Point- At the time of your ladder placing make sure the place is free from open electric cable or cord.

5th Point- Lastly when you are done with your job you should not be left on the ladder naked. You should close it and keep them in a safe place.

The maintenance and storage process

No matter which ladder you are using as in every case you need to know the proper way. Apart from this, the necessity of the product details as well as an important aspect. By the way, we hope at the end, now you might able to know the safe use of step ladders along with its overall details and proper caring. Best of luck with your next step ladder project.